Google Intros Inbox, The Next Generation Of Email App 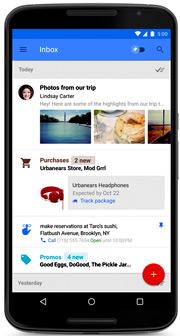 Google introduced Wednesday a new email app the company calls Inbox. Designed by the team who built Gmail, the goal is to reduce the amount of noise originating from spam and unwanted messages. The new design stems from email’s evolution. What began as a platform for occasional correspondence became a storage box from one to many.

The Inbox app looks quite different than other email apps and those with experience with the app liken it to Google Now. It aims to offer features that make information relevant and easy to access. It ties emails into Bundles, which groups similar types of email together automatically, such as receipts; Highlights, which brings up flight information, event details, and media from close friends and family; and a variety of Google Now type features listed as Reminders, Assists and Snoozes that act as a built-in to-do list.

The free app, by invite only at this time, works solely with Gmail accounts. It always will show incoming messages, but it scans each email to determine the most important. The app isn't intended to replace Gmail, but rather to act as a tool to reorganize and surface the most important messages based on what Google knows about the receiver.

While the jury remains out in terms of usability and convenience for Vincent Oria, a computer science professor at New Jersey Institute of Technology, others like Brad van der Woerd, director of intelligence product at Yesmail, can't wait to get their invite to give the app a try.

"The best practice when it comes to email marketing is to send the most relevant message," van der Woerd said. He believes the app with force marketers to work harder to create personal and relevant messages.

After Google added the Primary and Promotions tabs in Gmail, Yesmail ran tests to detect any drop offs in click-through and engagement rates. It turns out open and click rates rose 1% on average after the tabs were implemented because marketers worked harder to create more targeted email messages.

"More than 50% of emails are now opened on a mobile device, so this is a prime app Google's creating to support Gmail users," van der Woerd said. "There are a lot of bells and whistles in this new app, but at the end of the day the app really aims to create a better email experience. If someone uses this app as designed, it should allow them to see more relevant messages."