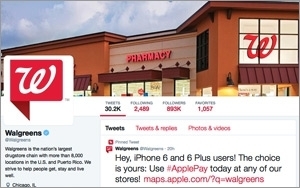 Walgreens knows an opportunity when it sees one. With drug chain rivals CVS and Rite Aid pulling support for Apple Pay, the company has taken to Twitter to promote its rollout of the mobile payments platform. Both CVS and Rite Aid are part of the Walmart-led Merchant Customer Exchange (MCX), which plans to introduce a competing mobile payments system called CurrentC next year, seeking to bypass credit card network fees.

Walgreens, which isn’t part of MCX, is capitalizing on the divide to highlight its support of Apple Pay across its stores. In its Twitter account last night, the retailer posted a tweet calling out to iPhone owners: “Hey, iPhone 6 and 6 Plus users! The choice is yours: Use #ApplePay today at any of our stores!”

Accompanying the message is an image of the hashtag “#ChoiceIsEverything” along with the Walgreens and Apple Pay logos, and a store locator using Apple Maps. The same post also appears at the top of its Facebook timeline, where the comments are filled with support and gratitude for Walgreens and scorn for its rivals. ”Yep, choice is everything. Screw CurrentC,” wrote Jay Doe, expressing a sentiment echoed among other commenters.

Walgreens is focusing not so much on the benefits of Apple Pay, but seizing on the recent news stories about CVS and Rite Aid blocking Apple Pay, reportedly because of contractual obligations under the MCX alliance that forbid retailers from providing alternative mobile payment options or face steep fines.

Addressing the controversy in a blog post today, MCX CEO Dekkers Davidson indicated that participating merchants must work exclusively with MCX, but suggested members can leave the consortium to pursue other payments systems like Apple Pay without incurring any fines.

In any case, Walgreens is casting its drug chain rivals as consumer-unfriendly by limiting choice — a message that is capable of resonating beyond early Apple Pay adopters to a broader swath of customers. In other words, it's not just a matter of payment options but of principle.

How many shoppers would actually switch brand loyalty over Apple Pay itself is probably negligible, but Walgreens nevertheless is using the situation to enhance its standing — especially among more affluent consumers — as more innovative and open-minded than the competition. There's a trace of irony here, since Apple has long been accused of creating a walled garden among its own hardware and software products.

Regardless of Walgreens' clever marketing, some industry observers predict the anti-Apple Pay strategy will only backfire on MCX members.

“MCX should be competing on the basis of its value proposition, not by pursuing a scorched-earth approach that attempts to stifle the competition. It’s a classic case of businesses acting on their own self-interests while completely disregarding the consumer,” stated Jordan McKee, a senior analyst with 451 Research, in a blog post.

That Walgreens — a brand that has long been aggressive in building out mobile services through its app and mobile site — would align itself with Apple Pay isn’t surprising. But if it’s going to trumpet the new capability, it has to deliver a good user experience itself. One early test of Apple Pay by Business Insider, found that Walgreens was among the stores where cashiers could not confirm that the service was actually up and running.