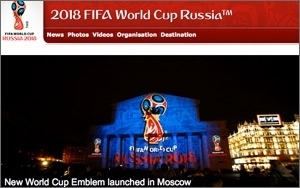 Telemundo is officially taking over the U.S. Spanish-language broadcast rights to FIFA soccer events beginning in 2015 in anticipation of the 2018 Soccer World Cup, the U.S. Hispanic TV network announced, giving it a lock on arguably the most important televised sporting event for U.S. Hispanic fans.

Previously, the Spanish-language broadcast rights were held by Telemundo rival Univision, which carried the 2014 World Cup in Brazil.

The announcement was made following the unveiling of the emblem for the 2018 World Cup, which will be held in Russia. In addition to TV broadcasts, Telemundo plans to distribute FIFA content, including World Cup matches, on mun2, a digital cable and satellite network also owned by Telemundo parent company NBCUniversal, as well as on associated Web sites and mobile apps.

In 2018, Telemundo will also incorporate World Cup-related content into regular programming including news broadcasts and updates.

There’s no question that soccer remains a huge draw for U.S. Hispanic audiences.