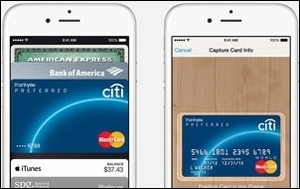 Financial institutions and retailers are hurrying to align themselves with Apple Pay, the technology giant’s new mobile payment service -- but it also faces plenty of competition from rival services that are hoping to leverage backing by major retailers (read Walmart) or their existing relationships with banks and credit card suppliers.

First up, this week saw more partners adopting Apple Pay, with U.S. Bank’s announcement that it is making the service available for customers using U.S. Bank Visa credit cards or debit cards. U.S. Bank is the fifth-largest commercial bank in the U.S. Meanwhile, PNC Bank is also integrating Apple Pay into its suite of customer services, and rumor has it that Barclaycard US is also preparing to incorporate it. On the retail front, QVC said it will begin using Apple’s fingerprint sensor Touch ID technology to enable customers to log in and pay with its mobile application.

At the same time, other mobile payment services are touting their own planned or existing products. Of course, there are mobile wallet services like Google Wallet, and SoftCard, a joint venture between mobile carriers including AT&T, T-Mobile, and Verizon. But merchants are also getting into the game with their own offerings. Most prominent is the Merchant Customer Exchange (MCX), led by Walmart, which plans to introduce its own mobile payment system, CurrentC, in order to avoid credit card network fees.

Another service, LoopPay, claims to be accepted at over ten million merchant locations across the U.S., through relationships with merchants like Target, Macy’s, Starbucks, and Walmart. LoopPay, which developed a technology compatible with traditional magnetic stripe readers for credit card payments, recently announced strategic investments from Visa and Synchrony Financial, a major private label card issuer.

Also this week, American Express announced the launch of the American Express Token Service, which aims to make online and mobile payments safer by replacing card account numbers with “tokens” that can then be used to complete transactions. The tokens are essentially a way of minimizing the amount of customer information needed to process payments, in somewhat the same way that Apple Pay eschews credit card information on mobile devices.

On the person-to-person front, this week MEA Financial Enterprises, a financial software firm, announced that it is integrating Payzur, a person-to-person mobile payment service created by Acculynk, into its iPhone and Android applications; MEA’s financial institutions will be able to provide customers with P2P payments from credit cards, using an email address or mobile phone number.