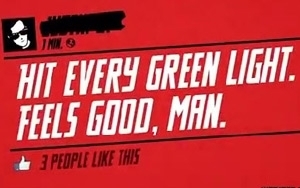 To promote the limited-time return of its Bacon Portabella Melt, Wendy's ran an all-day promotion on Nov. 17 in which it made a big deal out of nothing.

The QSR encouraged consumers to tweet about any accomplishment, no matter how trivial, with the hashtag #EarnedIt.

The brand then had the content of the tweets recorded in the deep, impressive voice of movie trailer voiceover artist Jon Bailey, and immediately sent the "epic" versions back to the tweeters.

The point: Making small victories — like finding a lost earring or only hitting the snooze button only twice that morning — sound important enough to earn the tweeter the treat of going to Wendy's to get one of the portabella melts.

Wendy's posted messages and short videos about the engagement/reward promotion on its Twitter page (and to a lesser extent on its Facebook site). It also sponsored the #EarnedIt promoted trend on Twitter for the day.

Wendy's recorded 132 of the epic-voiced audio files during the promotion, and some were featured on Facebook, reports VML, the agency handling the campaign's social elements.

The promotion yielded more than 4,400 #EarnedIt mentions, and more than 4,000 new social followers and 2,500 @Wendys mentions.

The campaign, dubbed "Indulgent Reenactments," will also include two "high-budget" videos that parody summer blockbuster movie shorts, with creative featuring "epic soundtracks, villainous squirrels and explosions," reports VML. Those videos will launch on YouTube, Facebook and Twitter on December 3 and 10.

Wendy's is also running a 15-second TV spot that features its live Wendy character and her office colleagues singing about small things they did to earn one of the portabella melts.