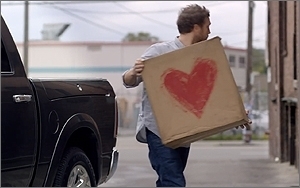 If you saw the three-hour long American Music Awards on Sunday night on ABC (while your parents watched Jay Leno get the Mark Twain Award on PBS), you probably also saw a lot of Chrysler Group.

The automaker, thanks to a partnership with Universal Music's Interscope Records, got to run several music-video style TV spots during the show, each one featuring a different artist (including Eminem, which shouldn't be too surprising, given his long-term involvement with the brand) as well as an assortment of Chrysler Group vehicles.

The four ads spotlighted artists’ music videos and vehicles. The Eminem ad teased the upcoming video for his song, "Guts Over Fear," wherein he drives a black Dodge Charger SRT Hellcat around the badlands of Detroit, cut with video of boxers sparring, and ending with a co-branded tag touting his new compilation release, ShadyXV.

Another of the four ads featured Fergie performing "L.A. Love" on the back of a wildly painted bus that is followed by a blue Chrysler 200. Phillip Phillips, in the ad about him, drives around in a Ram 1500 EcoDiesel to deliver a big cardboard box with a heart painted on it, while performing "Unpack Your Heart."

The 60-second spot combined the Fergie, and Phillip Phillips videos, and added a third one in which Gwen Stefani performs "Spark the Fire" with a Fiat 500L in the background. All of the ads carried the message "Let's Keep Driving Music." That's the only time you'll see the ads on TV, as it was a one-time deal, but the ads live on as videos on Chrysler Group's YouTube channel.

The partnership also involved a cause campaign from the Jeep brand around the Tyler Robinson Foundation for childhood cancer. One of the spots directed viewers to www.TRF.org.

Chrysler also had production integration in the show, though not in an overt way, as Fergie shared the stage with a classic Chrysler 300 from 1965 when she performed during the broadcast. The car, per Chrysler, was modified by Dennis McCarthy, who worked on movies like “Fast and Furious.”