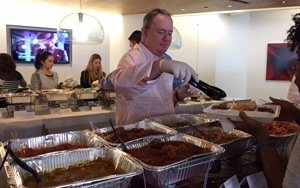 What started out as tradition eight years ago in Horizon’s Shared Services department has morphed into a Thanksgiving Day feast involving more than 800 employees at its New York office.

This year, however, in addition to its annual potluck lunch, the agency introduced the ‘Bring a Can, Take a Plate’ initiative to benefit the NYC charity City Harvest, which provides food for the less fortunate.

All Horizon employees attending the luncheon were asked to donate canned goods or money in exchange for a plate.

The decision to transform what used to be a holiday party into an advocacy initiative was easy, according to the agency. "City Harvest is a New York based charity," says a Horizon rep, adding that the two groups have worked together since 2006.

"Horizon supports several philanthropies throughout the year, but the holidays are an especially important time for food and giving."

More than 100 cans of food were brought to the office during the November 20th event, as well as financial donations from employees to benefit City Harvest.

One of the more entertaining elements of the annual event is the twist to have Horizon's senior leadership and management as servers. The agency's luncheon provided something for everyone, including beef brisket to Indian samosa to quinoa, cranberry and pecan stuffing to Caribbean oxtails.