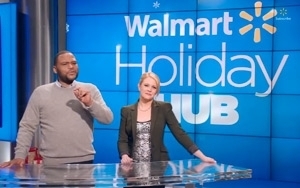 With all the marketing hysteria surrounding Black Friday, it’s easy to forget that consumers tune out most of it. But Kantar Media just crunched the numbers, comparing ad expenditures to visits from holiday shoppers, and found that Walmart, Best Buy and Home Depot are the season’s most efficient advertisers so far.

Working with Placed Inc., a location-driven insights specialist, it reports that Walmart’s massive $70.7 million investment on TV advertising during the holiday period earned it a 38% share of store visitor traffic, the highest for any retailer. As a result, its visitor acquisition cost was the lowest, at $1.9 million per share point. That’s not as good as last year’s $1.7 million per share point last year, but still well ahead of its competitors. (Separately, Walmart reported that Cyber Monday was its biggest online day ever, with customers viewing more than 1.5 billion pages in the five-day period starting on Thanksgiving.)

Target, which spent $61.6 million, more than twice its 2013 budget, only attracted a third as many shoppers, getting a 13.2% share; it spent $4.7 million per share point. Department stores and specialty stores were even less efficient: Each share point of visits cost Macy’s $10.5 million, for example, and Toys R Us $12.9 million.

Kantar based its ranking on TV ad spending on broadcast networks, cable and local stations from Nov. 3 through the day before Thanksgiving, and then used a panel of smartphone-enabled consumers to track locations and store visits for Black Friday weekend. It examined the top 59 retail destinations.

The study also found that all retailers started banging the Black Friday drum earlier this year. “Amidst concerns that early 2014 holiday promotions would make Black Friday shopping less relevant, a majority of the retailers we analyzed devoted a larger share of their TV spending to directly promote the event as compared to last year,” the report says. “Last year, only 4 of the 12 major retailers studied had begun ads with Black Friday messaging prior to the final week before the holiday, as compared to 11 this year.”

And in the final days before Thanksgiving, “Black Friday themes accounted for more than 85% of total TV spending from six retailers: Toys “R” Us, Home Depot; JC Penney, Macy’s, Kohls and Lowes.”