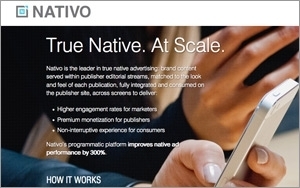 Hearst’s Jumpstart Automotive Group, which has advertising relationships with a portfolio of independent automotive interest publishers, is licensing Nativo’s technology for delivering native ads, the companies announced this week.

The new native ad platform will extend to all the sites in the Jumpstart portfolio and is scheduled to go live in January.

Among other things, the Nativo platform allows publishers to keep audiences on their sites, rather than referring readers who click on native ads to external destinations, which can disrupt the reader experience.

Altogether, Jumpstart sites reach over 25 million unique visitors per month, according to the company.

Nativo senior vice president for strategy and operations Chris Rooke noted: “Until now native has been very hard to scale, tending toward single site executions. So the prospect of multiple site executions being managed from a single platform, including independent sites not owned by the ad network, is very new.”

Rooke noted that the Nativo platform is also compatible with programmatic advertising systems and was hopeful that “more ad networks and ad providers that have worked with publishers on monetization will begin thinking about using this kind of technology to automate, streamline and scale their native ad products.”

This is the second partnership between Nativo and a Hearst subsidiary. In February, Hearst Newspapers selected Nativo to deliver native advertising to its local newspapers across the U.S.