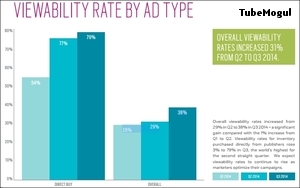 Video ads bought directly from publishers were 79% viewable last quarter, up slightly from 77% in the second quarter.

However, that’s a large increase from the 54% mark that direct buy deals had in the first quarter of 2014 and significantly better than the 38% rate that all video ads had in the third quarter.

This may be one reason that marketers continue to rapidly turn toward private marketplaces and “programmatic direct” technologies, which allow ad buyers to work directly with publishers while automating processes such as RFPs and I/Os.

“The amount of inventory purchased directly from publishers through automated channels increased 193%” in the third quarter of 2014 compared to the second quarter, per TubeMogul’s latest quarterly research report. Impressions purchased on a “programmatic direct” basis via TubeMogul’s BrandAccess -- the programmatic ad firm’s private marketplace service -- have increased 4,687% since the fourth quarter of 2013.

“The growth really demonstrates that both advertisers and publishers are making their direct buys programmatic,” a TubeMogul representative said.

TubeMogul notes that despite the rapid rise in mobile video inventory available for programmatic buying, CPMs have only decreased 11% — down to $11.19 — since the fourth quarter of 2013. TubeMogul theorizes that “likely reflect[s] high demand.”