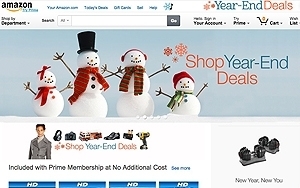 This holiday season, customer satisfaction scores plummeted compared with last years' for retail chain and ecommerce Web sites, per a study released Monday. Amazon now shares the top spot with QVC for Web site customer satisfaction. It became more difficult to increase scores for some sites like Williams-Sonoma, which limited discounts to one code per transaction on its ecommerce site. The retail store, known for its housewares and home furnishings, fell to 78 in 2014, from 81 last year.

The average customer satisfaction score for retail Web sites fell two points from 79 to 77. Even Amazon -- the leader since 2005, slipped to 83 -- tying with QVC for the highest score among the top 100 e-commerce sites measured. This decline was driven by rising customer expectations, especially as buyers become multichannel, multi-device experts performing much more research in each channel and across channels, and seek more information from online resources that provide discounts or recommendations.

The Answers Experience Index (AXI): 2014 U.S. Retail Edition takes a broad view of the marketplace, measuring the customer experience with the largest retailers in the United States as recognized this year by Internet Retailer's Top 500 Web and mobile commerce sites and the National Retail Federation Stores Top 100 Retailers.

The score of 83 marks a five-point decline for Amazon compared with its high score of 88 posted between 2011 and 2013. Customer satisfaction is scored on a 100-point scale where a score of 80 is considered excellent, meaning that an organization meets and exceeds customer expectations.

Amazon’s dramatic drop in customer satisfaction also allowed other retailers to step up. Customer expectation plays a key role in satisfaction. It may sound simple, but too often brands and retailers forget this concept. The data demonstrates the difficulty of staying ahead in a shift to an increasingly complex multichannel market, where consumers jump across multiple screens, from smartphone to tablet to PC to television. Ironically, the more brands give, the more consumers want. It's human nature. It's not that Amazon is no longer exceptional, but the report notes that the company's inability to deliver against its customer expectations -- particularly when it comes to product pricing -- opened the door for other retail brands to step up. And step up they did. Some as much as several points.

Customer satisfaction wasn't the only cause for the decline. The ranking attributes Amazon's drop, in part, to scoring much lower on customers' assessments of Amazon's price competitiveness. QVC held steady year over year to gain a share of the top ranking. Avon, L.L. Bean and Netflix closely followed each with a store of 82. Notably absent is Apple, which dipped two points to 80 in this year's customer satisfaction rating.

Amazon's mobile experience also suffered. Last year Amazon was five points ahead of any other mobile Web site or application. In 2014, Amazon scored 83, one point above Fanatics and L.L. Bean in mobile Web site and application satisfaction, followed by Newegg, QVC and Sony Store Online at 82.