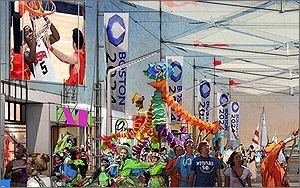 The United States Olympic Committee has selected Boston as the American city that will bid for the right to hold the 2024 Olympic games. Boston-based Interpublic agency Hill Holliday created many of the advertising and marketing materials that the city used to support its case. The shop will continue to provide marketing support for the city’s efforts as it competes against international venues.

A final decision is expected in the second half of 2017.

Part of Hill Holliday’s efforts leading up to the selection included a short film titled "2024 Beacon," created to convey the passion that Bostonians feel for their sports and the responsibility they feel to share that spirit with the world, according to the agency. That film and others can be seen here. The ‘Beacon’ film capped an all-day final presentation to USOC leaders by the city’s Boston 24 organization.

Hill Holliday CEO Karen Kaplan is a member of the Boston 2024 Partnership Executive Committee and the co-chair of the Public Relations and Marketing Committee for Boston 2024, along with Doug Rubin, founder of political and corporate lobbying firm Northwind Strategies.  Hill Holliday has been providing a number of services, including strategy, creative concepting, video production and social content.

Finalists in the USOC selection process also included Los Angeles, San Francisco and Washington. Boston will compete against Rome for the right to hold the 2024 Summer Games. There’s been unconfirmed speculation that Paris, Berlin and South Africa among others may also submit bids.

“We’re excited about our plans to submit a bid for the 2024 Games and feel we have an incredibly strong partner in Boston that will work with us to present a compelling bid,” said USOC chairman Larry Probst. “We’re grateful to the leaders in each of the four cities for their partnership and interest in hosting the most exciting sports competition on earth. The deliberative and collaborative process that we put in place for selecting a city has resulted in a strong U.S. bid that can truly serve the athletes and the Olympic and Paralympic movements.”

The notion of a Boston Olympics has proven controversial within the city, which was praised for its grit and determination to recover quickly from a terrorist attack during the 2013 Boston Marathon. A poll taken last year by The Boston Globe showed city residents divided over the idea of hosting the games, with 47% in favor and 43% opposed.

Despite the opposition, the USOC chose Boston, in part, because of the support the city had from a mix of business and political leaders, the Globereported. According to the paper, the USOC also liked Boston's strong sports culture and the opportunity to create an “Olympic legacy” in a new city.