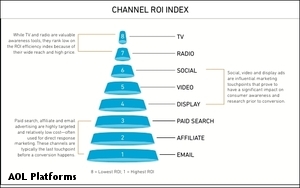 If “programmatic” is the father and umbrella term under which real-time bidding (RTB), programmatic direct and other terms live, then “data-driven marketing” is the grandfather.

Being a “data-driven marketer” gives advertisers confidence that revenues will increase (whether it’s a false sense of confidence is another topic entirely, but the confidence is there nonetheless.) And now AOL Platforms has released a report contending that being “customer-centric means being data-driven,” with multi-touch attribution sitting in the passenger's seat.

“Legacy methodologies such as last-click or first-touch are not up to the specifications necessary for marketers today to fully understand how their dollars are being spent,” AOL asserts in the report.

After researching two years' worth of data collected from Convertro, the attribution platform AOL acquired last year, AOL ranked channels and industry categories by ROI. TV and radio delivered the smallest ROI, AOL found, because of their wide reach and high price. At the same time, however, AOL notes that they are “valuable awareness tools.”

Social, video and display advertising were the next most ROI-friendly channels, and AOL says they “are influential marketing touchpoints that prove to have a significant impact on consumer awareness and research prior to conversion.” Paid search, affiliate marketing and email are the big three in terms of ROI, and while those channels are “typically the last touchpoint before a conversion happens,” writes AOL, each channel plays a role, “and to hold them all to the same standards would be to force an arbitrary comparison.”

AOL also found that the Home, Apparel & Accessories, and Entertainment & Leisure categories all had ROI above -- or in the case of Home, well above -- the industry's average ROI. On the other end of the spectrum, Auto, Food & Beverages, and Financial Services all had ROI well below the industry average.

However, AOL says its “research proved there was no strong correlation between an industry’s financial health and the ROI they were reporting. In other words, categories with ROIs below the industry average were not losing money on their media spend -- the average ROI was skewered toward a performance metric that did not take into account the broad spectrum of unique brand objectives.”

In other words, ooh-ing and ahh-ing at just one campaign metric -- in this case, the ROI of specific channels -- can cause marketers to lose sight of what is actually happening with their campaign.

That narrow view can also cause marketers to lose money when they think they are actually making money. A recent VivaKi report detailed how this can occur on RTB exchanges when looking only at cost-per-acquisition metrics.