Mazda Leaps Off The Page In Norway With 3D Ads 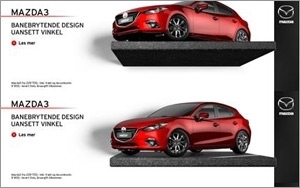 Can banner ads grab anyone's attention any more? Perhaps Mazda is using a new technology for a European advertising push: 3D digital, but without the glasses. The effort is being run in Norway, and was developed by ad tech and serving company Cxense.

The ads use an an optical illusion to make the creative look 3D, so one does not need special technology, wearables, or other enhancements to make it work, whether it is on a desktop or mobile device.

The effort, with creative by Danish shop Halbye Kaag, is on Amedia sites in Norway, reaching hundreds of thousands of readers, per Lauren Pedersen, VP of global marketing for Cxense. She tells Marketing Daily that the visuals use the 3D product models that agencies and companies already have in stock from developing advertising visuals and the products themselves.

“If you are doing product shots, you have 3D models and you can use the software that enables you to capture different visuals of those models. It's like a flyby, virtually.” The image shows at different angles as a user scrolls so it appears that the image is extending into space above the page. “At the moment, we are doing this in Norway only, across 107 sites.”

The click-through on the ads is 0.43 right, about four times industry average, per Pedersen, who said the effort launched in November, with Mazda the first brand to go live with it, though the platform, while in beta, did 3D ads for such brand categories as shoes and watches.

Mazda launched its first-ever ad campaign in Europe in 2011, extending the global “Challenger” campaign featuring “challengers” in different fields. It has also run digital campaigns featuring video interviews of executives and engineers from the company. That work was via JWT, Mindshare, Wonderman, Syzygy and SocialMedia8, and comprises rich media banners, and pre-roll driving traffic to the host site.