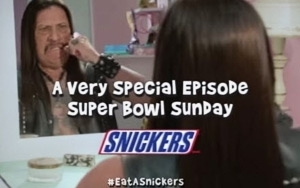 Snickers has released a 22-second preview of its 30-second Super Bowl ad, and is telling fans that if they generate 2.5 million social media engagements before the game's kickoff on Feb. 1, the brand will release the full spot.

The ad, from BBDO New York, is a "Brady Bunch" parody (or homage, if you prefer). The teaser shows Danny Trejo, the action star known for portraying rough villains and anti-heroes — frequently in movies directed by Robert Rodriguez, like "Machete" — playing the Bunch's "Marcia" as she might be expected to behave if she were on steroids.

Snickers said that viewing, liking, commenting on, sharing or re-tweeting the teaser video, using #eatasnickers, will count toward the 2.5 million engagements goal set for releasing the full ad prior to the game.

Scheduled to air in the game's first quarter, the ad is the latest in Snickers' "You’re Not You When You’re Hungry” campaign. That campaign was launched with the highly popular spot starring Betty White that aired during Super Bowl XLIV in 2010.