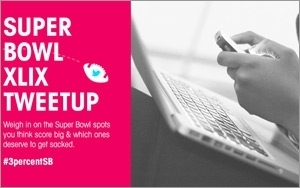 But with 45% of NFL's fan base comprised of women, connecting with female consumers should be a high priority for brands on Super Bowl Sunday.

Now, The 3% Conference, a movement focused on building a business case for more women creatives in the ad industry, is teaming with the Representation Project for the second annual Super Bowl Tweetup to encourage discussion about women featured in commercials airing during the game.

When asked about the current atmosphere of sexism within the NFL and whether the recent scandals may give brands reason to pause, Kat Gordon, founder of the 3% Conference, replied: "The NFL doesn't make ads or air them. Agencies make them and the network airs them. But I do think there's a sentiment of wanting to offset some of the scandals of the year with messaging that is a better depiction of American life. And the ads I've seen previewed thus far side-step many of the old stereotypes."

The Super Bowl Tweetup will use the hashtags #3PercentSB, #NotBuyingit, and #MediaWeLike to drive conversation on Twitter. Participants will include creative directors from agencies across the U.S. as well as Super Bowl viewers who chime in on the chatter regarding whether ads shown during the game are creative, effective, and appealing to women.

Viewers can also download The Super Bowl Tweetup Scorecard, which allows participants in the Tweetup to "call advertising touchdowns for brands scoring well with #MediaWeLike, and fumbles for those in need of improvement, with #NotBuyingIt."

The 3% Conference and The Representation Project will release an infographic online of the best and worst spots, based on a next-day survey of participants.

Still, many stereotypes shown during these commercials are so prevalent that they don't elicit concern from viewers. For instance, many don't question that nearly all movie trailers are voiced by men, indicative of women's role (or lack thereof) in the broader media and entertainment industry.

"The documentary 'Miss Representation' was a jolting wake-up call about sexism in the media," says Gordon. "You can't see that film and not be newly aware of how pervasive the problem is. We're proud to partner with the filmmakers behind that film, Representation Project, in this year's Tweetup. Their popular hashtags are powerful ways to message a brand and/or agency that their work is making you a fan... or losing them a customer."

In addition to the active tweeting from viewers via social media, there will be live in-person events at various advertising agencies: DDB in Chicago, The Hive Advertising in San Francisco, R/GA in New York, TRG in Dallas, and Clear Labs in St. Petersburg, FL.

"More agencies [are] self-organizing Tweetups of their own, in addition to the two official cities/agencies we're hosting," says Gordon. "Agencies in NY, Kansas City, Dallas, Florida, and Boston -that we know of - are self-organizing. So are female ad students on campus. The biggest gathering we're aware of is on the UNL [University of Nebraska Lincoln] campus."

Last year’s campaign reached 2.5 million consumers on a single day in more than 10 different countries. Several major brands have responded to #NotBuyingIt and #MediaWeLike campaigns including Amazon, Barbie, Volkswagen, and GoDaddy. "The key challenges for brands today are that consumers can talk back in real time about media," says Gordon. "Brands need to craft messages that stand out from the clutter and which invite positive conversation. It's a delicate line to walk."