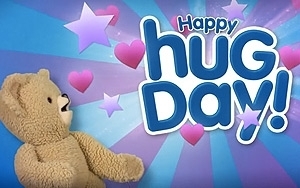 Fabric softener brand Snuggle is running a Valentine’s day campaign that includes videos, a street activation and a "Snuggle Valentine Video Card" site with an animated Snuggle Bear developed by Oddcast at share.snuggle.com, where users can plug in the name of a recipient and choose a video message for emailing or sharing on Facebook or Twitter.

The Snuggle Bear will be on the streets of Manhattan on Feb. 13 in a SnugMobile RV to attempt a Guiness World Records for most hugs by a puppet (5,000) in eight hours. Snuggle Bear will make stops in Times Square and Columbus Circle.

Kristine Campbell, manager of the Sun Products brand, tells Marketing Daily that this is the third year the brand has activated against Valentine’s Day. Last year, it was in Times Square for the first time, giving away something like 15,000 Snuggle Bears. “This year, it's an RV that our agency partners have tricked out.”

The company, she says, has spent the past five years building awareness of the mascot. “We have been on a journey to make it an icon with a focus on Valentine's Day. Three years ago, it was a small social e-card effort. Last year, we went from engagement with social media fans to making it experiential. This year, there is national reach.”

The national program includes a four-week social-media plan with video content across paid and social platforms, with themes like “Turn Hug Day into Snug Day.” In addition to Facebook and Twitter, the video content is on sites like NBC.com, and ABC.com. “And we are also doing this for mobile platforms, as well as with national PR. We have found that video content is very successful for Snuggle because we think we have an icon people love to engage with.”

Campbell says that over the past five years Snuggle has had a robust ad program, via AOR Lowe Campbell, N.Y. The bi-modal strategy comprises “equity” ads with a “family moments” theme, she says, and product-innovation spots on the other, such as last year's Scent Boosters campaign in which the mascot is made into a CGI character having a synesthetic experience of fragrances. Per Campbell, the brand has begun shooting a new slate of ads, and will be producing new digital content, as well. “We will be following up with other videos,” she says. One of the current ones has the bear dancing. In a forthcoming one, he’ll twerk. What's not to like about that?