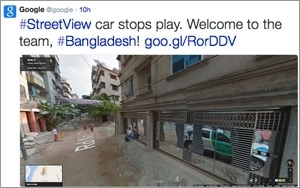 A deal on the table could put real-time Twitter tweets back in Google search engine results. Reports suggest a renewed partnership in the works between Twitter and Google beginning sometime in the first half of this year, per reports. The prior relationship lasted from late 2009 through mid July 2012.

"This is the start of a tidal wave of changes to search and discovery, which will accelerate this year and into 2016," said Jared Belsky, President of 360i. "For the past five years, search has been relatively neat and tidy, with 95% of searches happening on Bing, Yahoo or Google – and for a time, most of that being on a desktop.  We are now entering an era where search and discovery is happening everywhere, and intent signals are coming in from new angles."

Belsky said Google recognizes the need to become the most relevant. It means doing more than saying "they have the most 'technically right' result, but must also have the most 'relevant result' and signals of relevance often come from right-time social signals."

Colin Sebastian, an analyst at Robert W Baird & Co., believes the new partnership would make it less likely for Google to try to acquire Twitter. "Twitter indicated at last year's analyst day that closer relationships with search engines were a priority, and announced that it opened access to the top 50,000 hashtags trending at any given time," Sebastian wrote in a research note. "This increased exposure drove a 10x increase in visits from logged-out users, with another 125 million logged-out unique visitors able to view individual tweets from search queries."

Sebastian believes the deal will be beneficial for both companies. For Google, the Twitter feed fills search results with live information indexing events in real-time. For Twitter, the agreement provides a "new source of data licensing revenues," per Sebastian.

Twitter has similar deals with Bing and Yahoo. In 2009, Microsoft Bing inked separate deals with Twitter and Facebook that brought real-time tweets and social media status updates to the search engine.

Bloomberg reports that former Twitter COO Ali Rowghani, who left the company last year, did not want to renew the Google deal to "keep more control over Twitter's content."