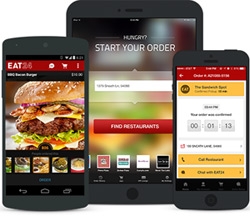 The San Bruno, Calif. food delivery service has about 20,000 restaurants on its platform across 1,500 cities, and was already a Yelp partner. The business competes with GrubHub and many others.

Mobile has made online and mobile food searches and ordering extremely popular on Yelp. The company believes the acquisition of Eat24 will allow it to build a better, more seamless ordering experience for consumers that it can grow beyond 2015.

Jeremy Stoppelman, CEO at Yelp, speaking at the Goldman Sachs' Technology and Internet Conference Tuesday, said consumers are more engaged when they start searches on the Yelp app, compared with those starting on a search engine such as Google or Bing. Users look at many more pages when starting from the app. Yelp estimates about 65% of searches are done on mobile devices, and more than 50% of ad impressions are served on mobile.

Yelp also continues to analyze the site's speed, infusing resources to increase site search and transactions. The vision means expanding Yelp's focus on reviews to one that supports transactions. Stoppelman said users can expect features "in the not too distant future" that enable consumers to dive into the transaction.

"We view this transaction as a logical acquisition to help Yelp move deeper down the funnel to close the loop, similar to the SeatMe transaction in July 2013," wrote RBC Capital Markets Mark Mahaney in a research note. "Eat24 is also a known asset to Yelp, as it was already integrated into the Yelp platform, providing us with assurance of deeper due diligence and a clearer path to full integration. Yelp has similar partnerships with other food ordering/delivery services, such as Delivery.com."