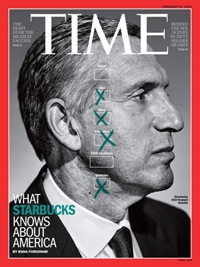 After starting out in the world of online advertising, programmatic buying has been extended to fields as diverse as mobile media, cable and satellite TV, out-of-home advertising, and broadcast radio. But print has remained largely untouched -- until now, that is. This week Time Inc. announced a collaboration with MediaMath that will make print magazine audiences available to advertisers using its programmatic marketplace.

The programmatic print sales are available via an interface that operates in conjunction with Time Inc.'s existing Global Exchange, a private marketplace for its digital ad inventory powered by Google's DoubleClick Ad Exchange. The publisher is also providing post-campaign measurement via a partnership with AdMeasure.

There are some limitations on the programmatic print sales: advertisers can choose audience segments but not specific titles, and they can't currently import their own data for targeting print buys. However they may be able to do so in future.

Target is one of the first advertisers to use the programmatic print-buying option for a campaign across multiple Time Inc. titles, executed by its media agency Haworth, including placements in People, Time, Entertainment Weekly, and Sports Illustrated.

As noted, programmatic buying has been popping up all over the traditional media landscape recently, at least at an experimental level. Last year audio ad tech firm Jelli, which once specialized in social radio programming, reinvented itself as a programmatic platform for broadcast radio ad sales. And in December Posterscope launched a real-time trading platform for digital billboards in collaboration with data company Vistar Media, with partners including Outfront Media (formerly CBS Outdoor) and Lamar.