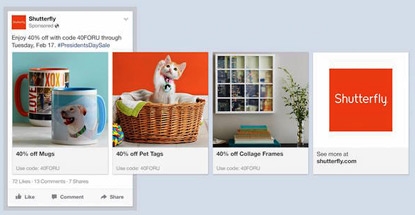 For better or worse, Facebook is going to start looking a lot more like a product catalog.

On Tuesday, the social network plans to unveil Product Ads — a new format for brands to show off multiple offerings, and in some cases, their entire inventory.

To avoid overwhelming users — and improve conversion rates — Facebook says the ads will be highly targeted and customizable.

Leading up to its official launch, Facebook has been testing Product Ads with a number of brand partners, including Target and Shutterfly. For these and other partners, Facebook says it can manually create campaigns targeting particular products to specific audiences, or automatically optimize their campaigns to do essentially the same thing.

Analysts on Tuesday said the new initiative makes good business sense. "Facebook has clearly learned from Google's product listing ads by including automatic product feeds so that retailers can keep ads aligned with real-time inventory," said Yory Wurmser, retail and ecommerce analyst at eMarketer. "With the wide-scale introduction of product ads, Facebook is creating a full menu of direct response advertising for retailers."

Shown in single- or multi-product ad units, offerings can be customized for use throughout the purchase funnel from discovery and awareness to checkout. Brands can also curate their offerings in a number of ways, like highlighting products that were most recently viewed by shoppers, or those products that are already selling well.

Among other options, advertisers can automatically target users who have previously visited their Web site or app, as well as reaching people based on specific interests and geographies.

The new units also work across all digital channels. When used with Facebook’s conversion pixel or SDK, the company says product ads are optimized for each person that sees them.

In addition, the automated ad system will turn off ads for specific products when they are out of stock.

In tests, brands say the new ad units performed well. Kristi Argyilan, senior vice president at Target, reported that the Product Ads resulted in a 20% increase in conversion compared to other Facebook ads.

If successful, the new offering could challenge Pinterest, and even more traditional ecommerce leaders like Amazon and eBay.

Facebook has steadily been making inroads into ecommerce. With the help of payment start-up Stripe, the social giant recently unveiled a “Buy” button, and expanded its classifieds-style commerce efforts.

By comparison, email contributed 27.3% of total online sales, followed by 18.9% originating from free search, and 18.5% from paid-search marketing.

As of Tuesday, Facebook is making its new Product Ads available today in the API through Marketing Partners, and plans to roll it out in Power Editor over the next few weeks.