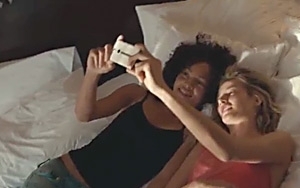 The new campaign, with the tagline “We Go Together,” is part of Hampton parent company Hilton Worldwide’s broader “Hilton at Play” initiative, which highlights Hilton properties as destinations for leisure and recreational experiences.

The “We Go Together” campaign centers on two 30-second TV spots, produced by Austin’s GSD&M and featuring music from Belle and Sebastian and Wild Cub. The ads target weekend leisure travelers with depictions of action-packed trips with Hampton and its staff as home base.

The campaign, set to continue through 2015, also include online banner ads, digital video, radio spots, cinema ads and placements with online channels, including Popsugar, ABC, and Hulu, as well as national cable programming.

The campaign will also be supported by social media and PR components.

This is just the latest in a series of music-based initiatives by Hilton. Previously, the company partnered with Live Nation for a promotional campaign centering on concerts.

Hilton has also been pushing its leisure travel message on social media. In August-October of last year, Hilton ran a promotion called “Our Stage, Your Story,” encouraging guests to post travel photos to Twitter, Facebook or Instagram with the hashtag #HiltonStory.

Each week, Hilton selected one winner to get a free weekend at any one of 550 Hiltons around the world.

It’s not all digital, however. Back in 2013, Waldorf Astoria Hotels & Resorts and Conrad Hotels & Resorts, both owned by the Hilton Corporation, launched new print luxury magazines specifically tailored to their hospitality portfolios.