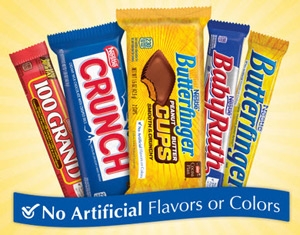 Even the candy category is finding itself pressured to respond to consumers' increasing rejection of artificial ingredients in their food and beverages.

The latest company to jump on the bandwagon is Nestlé USA, which announced that it will remove artificial flavors and FDA-certified colors, such as Red 40 and Yellow 5, from all of its U.S. chocolate brands by the end of 2015. Its reformulated candy — flagged with the new benefits claim — will begin appearing in stores by mid-year.

Nestlé USA will be the first major U.S. candy maker to remove the artificial ingredients — although other, larger companies are working on it, reports The Wall Street Journal. Hershey is moving toward using sugar instead of high-fructose corn syrup (HFCS), and Mars is exploring using natural colors in M&M's.

More than 60% of Americans say that no artificial colors or flavors is important in their food-buying decisions, according to Nielsen’s 2014 Global Health & Wellness Survey, and Nestlé reports that its own research confirmed that consumers would prefer their favorite candy brands to be free of such ingredients.

"When making these changes to more than 75 recipes, maintaining the great taste and appearance consumers expect from the chocolate brands they know and love is our #1 priority," said Leslie Mohr, nutrition, health and wellness manager, Nestlé Confections & Snacks. "We conducted consumer testing to ensure the new recipe delivers on our high standards for taste and appearance."

The artificial ingredients are being replaced by ones from natural sources, according to the company. For example, in Butterfinger, Red 40 and Yellow 5 will be replaced by annatto, which comes from seeds from the fruit of the achiote tree, and in Nestlé Crunch, vanillin will be replaced by natural vanilla flavor.

The U.K. division of Nestlé USA's parent, Switzerland-based Nestlé SA, finished the multi-year process of making the same transition with its chocolate brands in 2012, and Nestlé next plans to take on the more difficult challenge of removing the artificial flavors and colors from its non-chocolate brands, like SweeTarts, the company told WSJ.

The number of brands now removing FDA-approved artificial or processed ingredients from existing products; starting to promote some existing products' lack of same; and/or launching new products that can make the claim, has been snowballing.