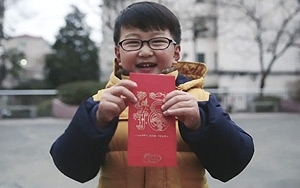 Chinese New Year is over -- but hopefully, nobody picked up a bug from the billions of dollars passed around in the billion or so envelopes given for good luck. Hongbao, the traditionally red envelope, is filled with money and given to children. The money inside should be in even-digit amounts, however, as odd usually means a funeral. And no sum with “four” in it, since the Chinese word for that number sounds almost like the word for “death.”

Lifebuoy, with its China agency BBH, kicked off a giveaway of a few million red packets to mark Chinese New Year on Thursday. The idea is that after receiving their gifts of money, children can run to a sink and use that very red packet to wash their hands, hopefully killing whatever microscopic topiary of contagion may have been passed along -- thus doing something to ensure that the envelopes don’t guarantee an unkind kickoff to the year.

In a statement, Johnny Tan, CCO of BBH China, said the campaign promotes Lifebuoy because it isn't a typical ad pitch. “This idea hopes to provide a useful, surprising and assuring experience for moms and dads at a time when hygiene and safety is top of mind.”

The soap brand, probably one of the oldest global brands, is no longer made in the U.S. and UK (where it was launched about 110 years ago), and no longer sold in the U.S. It is made in Cyprus and sold in Africa and in parts of Asia, including India, per the company, which says it is the category leader in every market in which it is sold. The brand is also co-founder of Global Handwashing Day.

The brand, comprising a line of nine hygiene products, says nearly half of consumption is in rural Asia (where most people live on less than a dollar per day.)