With Help From Ad Shop Mono, Sperry Top-Sider Is Rebranding 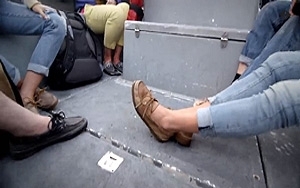 To coincide with its 80th anniversary, Sperry Top-Sider's parent company Wolverine Worldwide is working with  Minneapolis-based creative agency mono on a makeover for the iconic shoe brand.

Sperry’s refurbished brand platform is designed to connect with "those who are not just in search of living for the moment, but with those who want to move out of their comfort zones, visit unexpected places, try unfamiliar things and discover more about themselves and the world around them,” according to the firm.

"Sperry is an iconic brand with a rich heritage that has gained the loyalty of a solid audience of Sperry-lovers," says Michael Hart, co-founder and creative co-chair of mono. "We want to continue to fuel their loyalty to and passion for the brand. And at the same time, Sperry is a brand that is growing and the campaign also aims to introduce the brand to those who are unfamiliar."

This month, the first phase debuts with the “Odysseys Await” campaign running across print digital, and social media. The concept is designed to appeal to "Intrepids" – which the company calls modern day explorers who have a passion for discovery.  The creative for this first phase suggests the best stories are “written” with feet. It introduces a newly redesigned logo, upgraded for the first time in 20 years.

The second phase of the campaign will debut in mid-March with an experiential and content creation initiative that celebrates inspirational discoveries. Some 80 ambassadors will receive a custom shoebox, containing a new pair of Sperrys and an itinerary that will send them on different odysseys around the world.

These brand ambassadors will then be tasked with introducing new people, places, and experiences to create unforgettable stories to be shared globally, on Sperry social channels, at Sperry specialty retail stores and Sperry.com.

Still, this initiative's success has the tricky task of appealing to both diehard fans as well as new consumers who are unaware of Sperry Top-Sider.

"One of the biggest challenges was striking the right balance of building on the existing brand equities, while also repositioning Sperry to be more aligned with its true heritage," says Hart. "We tapped into the inventive, adventurous spirit of the brand's founder, Paul Sperry, in order to connect with those adventurous souls who strive for lives fully lived."

Wolverine Worldwide is investing heavily in repositioning this brand. The company recently shifted Rick Blackshaw from its Keds brand to become President of Sperry Top-Sider and Stephanie Brocoum has been brought on board as Sperry’s SVP of Marketing.

Further, media investment in 2015 will triple the amount spent in 2014. In 2013 the brand spent nearly $12 million on ads and for the first nine months of 2014 spending totaled about $7.4 million, according to Kantar.

This Story has been updated to include ad spending data for Sperry from Kantar.