For the third year in a row, we have conducted a nationwide study on how the U.S. Hispanic community feels about the health of the economy, the status of their own financial health as it relates to the economy, and what plans they’ve made to spend their disposable income in the economy.

But this year, we decided to stir the pot. For the first time, we compare Hispanics to other ethnicities, Non-Hispanic Whites, African-Americans, and Asian-Americans.

For those looking to reap the benefits of targeting multicultural populations, understanding the key differences and similarities among these groups is critical to your success.

To start, we wanted to know what survey participants thought about the U.S. economy, in general, and where they thought it was headed over the course of the year.

Of the responses received, 46% of Hispanics said they thought it would “be better.” And as is common within the Hispanic community, this sentiment was largely driven by their level of acculturation. When we took a closer look at the numbers, we saw that 50% of low- and medium-acculturated Hispanics said “the economy will be better,” but only 35% of the highly acculturated group were in agreement.

Despite the differences, overall it appears that optimism toward the stability of the national economy is on the uptick among Hispanics, moving from 37% in 2014 to 46% this year.

And they’re not alone. New to the study this year, Asian-Americans reported sharing a similar optimism when it comes to the economy, with both groups closely followed by African-Americans (52%) and Non-Hispanic Whites, at 32%.

So now we know that U.S. Hispanics are almost 50% sold on the notion that the national economy will thrive in 2015. Yet, the question has to be asked if that same optimism will carry over from the national budget to their personal budget.

Well, if we got our numbers right, we think it will.

Overall, 56% of Hispanics feel good about their personal financial outlook. And while they still lag behind African-Americans (64%), they are well ahead of Asian-Americans and Non-Hispanic Whites (both at 47%).

Finally, it looks like Hispanics are poised to spend their hard-earned dollars on some fairly big-ticket items in 2015. In fact, more than one-third of all those surveyed said they are planning on purchasing at least one of the following: 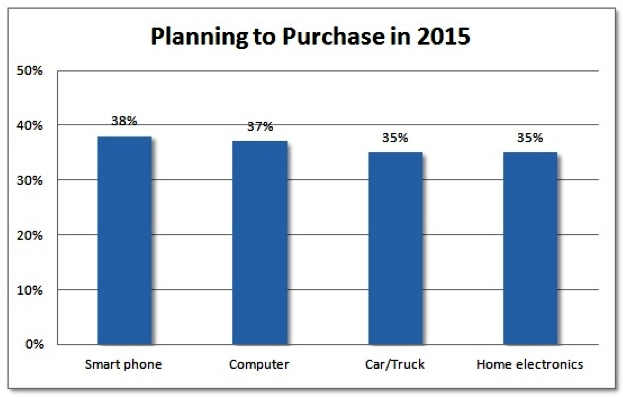 Which leads us to what this data really means to you.

What do we know about the Hispanic consumers so far?

For brands in these industries, you’ve got a tremendous opportunity to get in front of the Hispanic community at a time when they’re poised to buy. Use this opportunity to build a strong relationship with them now, early in their buyer journey, by immersing yourself in the culture that makes this community so attractive.