Collective is well known for its use of IP, but mostly it’s associated with the Internet Protocol version of that acronym. Today, it received the other kind, an intellectual property courtesy of the U.S. Patent and Trademark Office, recognizing it as the rightful owner of a process enabling it to connect TV audience behavior to Internet -- and mobile, social, etc. -- audiences.

“It’s been a long time coming,” a relieved Joe Apprendi just told me during a phone conversation explaining the significance of U.S. Patent 8,949,890.

“These things take time,” the Collective CEO said, noting that the company first filed for a provisional patent for its unique process May 3, 2011.

Four years later, he says, the programmatic marketplace has developed faster than the Collective team expected when it filed, and the need to unify TV and digital audience strategies -- and to coordinate how advertising is targeted across them -- is greater than ever.

“First and foremost, this is important because it protects the investment we’ve made. Beyond that, we really want to encourage the industry-at-large to license this technology,” he explained, noting that to date, Collective has operated more as a managed service enabling advertisers, agencies and trading desks to extend their TV audience reach through the programmatic audience-buying marketplace.

While it has licensed its data to other third-parties -- principally data management platforms (DMPs) -- one of Collective’s secret sauces is its own, integral DMP and it is looking at ways it can license its technology and data directly to customers who want to manage their own audience marketplace.

“We think it’s extremely effective. So far, we have managed more than 1,000 advertiser campaigns using this technology and we are always finding new targeting opportunities across the programmatic landscape.”

For those who are unfamiliar with the process, basically it starts by analyzing second-by-second viewing data from a database of more than 30 million TV set-top devices, and marrying those viewing behaviors -- on an anonymized basis -- to an array of data attributes that power Collective’s “audience engine,” it’s DMP. It then uses that data to find the best possible audience matches on the programmatic Web, mobile, social and video markets.

That, in a nutshell, is what USP 8,949,890 covers. How it’s applied is up to the people who use it. In its managed service approach, Apprendi says Collective is “DSP-neutral” and will simply work with the DSP, exchange or API that can best fill the audience supply the data identifies. If you’ve got any ideas for how to license that, you might want to give Apprendi a call. 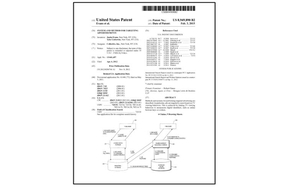