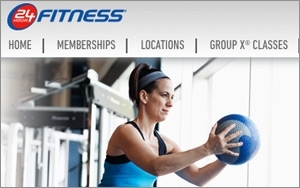 Zoom Media is expanding its network of place-based advertising in health clubs to include 24 Hour Fitness, one of the nation’s largest health club chains, which is giving Zoom exclusive responsibility for ad sales representation through a long-term media and ad agreement.

Media content will include training and nutrition advice, as well as fashion and travel ideas from the health club chain’s digital magazine, 24LIFE.

With 413 locations across the U.S. at the end of 2013, 24 Hour Fitness is the second-largest health club chain in the country in terms of number of venues, after LA Fitness, which also has some locations in the Zoom network. The ad sales agreement brings Zoom’s active lifestyle audience to 25 million consumers, generating around 102 million impressions, according to Nielsen.

The deal comes alongside Zoom’s announcement that it is redefining its brand identity as Zoom Active Lifestyle Marketing. Zoom’s network already included hundreds of health club chains and independent locations across the U.S. and Canada. In February Zoom added over 100 fitness clubs operated by GoodLife Fitness.