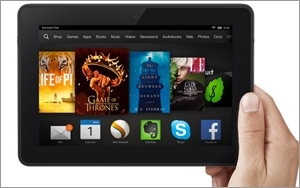 Apple most certainly has its brand acolytes, but when it comes to the customer experience of owning a tablet, it can’t beat Amazon.

In a ranking of customer experiences within the computer and tablet industry by The Temkin Group, Amazon (a new entrant this year, thanks to its Kindle and Fire Tablet products) emerged as the top experience provider, beating out Apple, which had held the top position for three years.

The rankings are part of the 2015 Temkin Experience Rankings report, an annual ranking of companies based on a survey of 10,000 consumers. While the rankings have included computer companies for the past five years, this is the first year tablets and e-readers were added to the category, Temkin says. When it comes to tablet ownership, Amazon earned a 76% rating (based on consumers’ ability to work with the company, the emotional response to those interactions and the success of those interactions), beating out Apple, which had a ranking of 68%.

“I’m not surprised Amazon took first place,” Temkin says. “I am surprised by the gap. Having this be the first year [including tablets], I wasn’t sure what we’d see.”

Further down the list, Hewlett-Packard had a 64% rating, followed by Barnes & Noble, Toshiba and Sony (all at 60%). Dell and Lenovo followed at 57%, while Lenovo and Asus had ratings of 55%.

Overall, the computer and tablet industry averaged a 63% rating, tied for 11th place out of 20 industries. Though the industry improved its overall rating by 1.2%, the overall focus on product over service leaves room for improvement, Temkin says.

“A lot of their focus is on the definition of the product, and the product’s lifecycle, and no the ownership experience,” Temkin says. “It’s not about doing one thing differently, but doing many, many little things in a different way.”