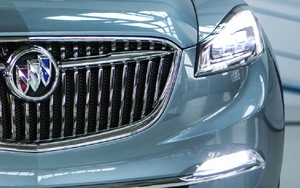 Automotive recalls have been increasing, both because of the sheer volume of the GM recalls and others that haven’t gotten as much press, and because of automakers who have just gotten proactively trigger-happy — an effort to beat National Highway Traffic Safety Administration (NHTSA) to the punch.

Well, the good news is that automakers, especially General Motors, have gotten pretty good at making sure the recall experience where it happens — at dealership service bays — is good. J.D. Power and Associates, in a new study, says that while the percentage of all dealer service visits related to automotive recalls has hit 16% (the former peak was 15% in 2011), satisfaction among recall customers has risen as well. The firm’s new 2015 U.S. Customer Service Index (CSI) Study finds that the overall CSI among customers who take their vehicle to a dealer for recall-related work improved to 789 on a 1,000-point scale, up from 777 in 2014. All of GM’s brands are among the top five automakers in customer service.

Mike Battaglia, senior director of automotive retail at J.D. Power, tells Marketing Daily that automakers have streamlined service delivery. “What we are seeing in the industry is that, in spite of more recalls, manufacturers are better prepared, have the right parts and supplies on hand, and dealers are getting more used to handling recalls through the normal course of business. And manufacturers are more proactive, often well before NHTSA gets involved.”

In the study, based on responses in the fourth quarter of 2014 from more than 70,000 owners and lessees of 2010 to 2014 model-year vehicles, Jaguar ranks highest in satisfaction among luxury brands. Following Jaguar in the luxury ranking are Lexus, Audi, Lincoln, and Cadillac. Buick ranks highest among mass-market brands for a second consecutive year, followed by Mini, Volkswagen, and GM’s other units GMC and Chevrolet. Then comes Toyota, Hyundai, Kia, Honda and Nissan.

He says that among mass-market brands, customers who scored service below 750 had a brand repurchase rate of 56%, while those who had a CSI index of 950 and higher had 70% plus repurchase. “And I think that customers in the market are more used to the concept of recall, and are not panicking when they get a notice that their car is part of a recall. They see it as a course of business, and there is a level of confidence when its taken care of and if they don't have to wait to long to get it done.”

An express lane for customers was a big plus, substantially outperforming those that do not offer it. Internet service appointment scheduling isn't a big mover, however, with only 9% of customers booking appointments via the Internet, compared with 73% who call for an appointment, per the firm. Forty-five percent of customers say they are unaware that Internet scheduling is available to them. Satisfaction is substantially higher among customers who work with the same service advisor they worked with in the past.