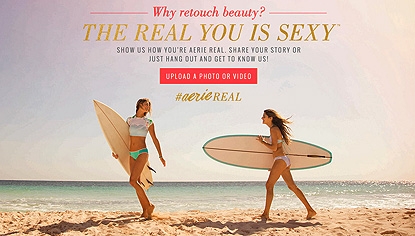 American Eagle Outfitters has just scored a big win for its year-old #AerieReal campaign, earning the first-ever “Seal of Approval” from the National Eating Disorders Association (NEDA). And the association says the honor comes at a time when body diversity is really catching on among young women, fueled by Gen Y’s sophistication and skepticism of marketers’ messages.

“With social media, it’s become so much easier to shame brands for doing it wrong,” says Claire Mysko, director of programs for NEDA. “We thought it would be a better idea to call out and applaud a company who is doing right.”

Aerie is American Eagle’s retail brand devoted to intimates and swimwear, and Mysko thinks part of the #AerieReal campaign’s appeal “is that we really are a turning point in terms of media literacy. At one point, we needed to educate young women about photo retouching. Now, in this age when we are constantly broadcasting ourselves, they know all about it. Our surveys have shown that three-quarters of our constituents have altered photos of themselves,” she tells Marketing Daily.

Activists have been railing against too-thin fashion models for decades, but recent backlashes against Target, with a photoshop gaffe that went viral; Abercrombie & Fitch, which openly spurned heavier customers; or Lululemon, with unkind remarks about women with larger thighs, have shown how quickly Facebook and Twitter can punish brands that make women feel ashamed about their weight or body type.

In addition to its pledge not to retouch images of its models (“Why retouch beauty? The real you is sexy.”), Aerie also maintains a site encouraging young women to upload unretouched videos and images with their comments. Its latest push is focused on Spring Break and bikinis, highlighting its new swimwear collection.

And last month, it announced that it would deepen its commitment to body-positivity, signing on as the lead sponsor of NEDA’s national walks awareness program, “NEDA Walk. Save a Life,” which includes more than 65 events around the country.

“Eating disorders are very complex,” Mysko says. “It isn’t like people see a magazine ad or billboard and then spiral into a problem. But there is a connection, and we want to encourage companies to step up and present images of beauty and confidence using all different kinds of body types.”

It’s also important to focus on teen brands, she says, because younger girls are considered especially vulnerable. One study found that 69% of American elementary school girls say the pictures in magazines influence what they consider an ideal body type, and 47% say the photos make them want to lose weight.

"The idea is that we want to challenge this idea that 'insecurity sells,' and show marketers that using body-positive imagery can be profitable."