Turtle Wax Drives In Front Of Furious 7 For New Campaign 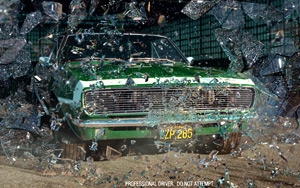 The Furious 7 film franchise is all about cars. which is why Turtle Wax is using the movie as the launching pad for its new integrated advertising campaign.

Developed by O'Keefe, Reinhard & Paul (OKRP), the 360-degree campaign debuts in front of Furious 7, beginning April 3. It will then expand to TV, digital, mobile, social and PR, as well as digital initiatives, such as a full “page grabber” that takes over the screen with the video embedded.

Turtle Wax is tripling its ad spending behind this campaign. The brand has recently focused its budget primarily on social media, spending only $229,000 on advertising in 2014, down from $3.056 million in 2013 and $6.217 million in 2012, according to Kantar Media.

Starting May 1, the campaign will introduce an interactive campaign hub -- TurtleWax.com/FreeTheSoul -– that features a social engagement sweepstakes that encourages consumers to share their #FreetheSoul moments.

Participants get a chance to win the new Turtle Wax Ice with Smart Shield Technology line and a road trip gift pack for their ultimate “Free The Soul” adventure.

The campaign's concept supports the notion that cars are not meant to sit idly and collect dust. Rather, they are meant to roar and screech and skid and speed. Indeed, the idea was to appeal to car drivers who want cars that “go” versus cars that are just for “show.”

To that end, the “Break Out” spot features two automotive "personalities" –- one a vintage green Camaro and the other, a fast-driving liberator who frees the Camaro from a dusty garage filled with old automobiles. The tagline suggests when you “protect the body” with Turtle Wax, you can “free the soul” for you and your car.

“This campaign brings a new energy to Turtle Wax that is meant to inspire car enthusiasts to take their cars out on the road,” says Matt Reinhard, Chief Creative Officer at OKRP. “Our vision for this work was inspired by the action-adventure genre, complete with amazing special effects well handled by our director Paul Mitchell and production company The Mill. Even the music from the hot French DJ, Gasseffelstein brings a fresh excitement to the brand.”

“Turtle Wax has been part of pop culture for decades,” says Sandy Kolkey, Chief Marketing Officer, Turtle Wax. “But Turtle Wax isn’t only your dad’s car wax. We’ve developed this campaign to appeal to the audience of car lovers who are passionate about their cars. No matter what kind of car you have, you deserve to feel great owning it and driving it. That’s where Turtle Wax comes in.”

Chicago-based OKRP, which is backed by Interpublic Group with a minority ownership stake, has worked with the privately-held Turtle Wax for about one year.