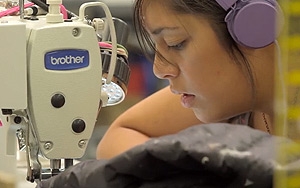 Patagonia is putting a mobile twist on its famous “buy less of our stuff” messaging this spring, starting its Worn Wear Spring Tour: The outdoor clothing manufacturer is sending its biodiesel repair wagon on a cross-country tour. Besides collecting torn jackets and frayed hiking pants along the way, it hopes to raise awareness of its 40-year-old Reno Repair department, which it claims is the largest garment repair business in the country, mending some 30,000 garments per year.

Stopping at stores from Oregon to Boston, Patagonia specialists are also giving lessons in gear repair — even providing customers with someone else’s worn-out duds if they haven’t brought their own to fix up. And it’s hoping to build attention for the effort with a short film, and collecting customers’ own garment love stories.

“It’s a brilliant strategy for Patagonia,” says Suzanne Shelton, CEO of the Shelton Group, a Knoxville, Tenn.-based marketing communications company that specializes in sustainability and environmental trends. And it works especially well for them because it taps into the social mindset of Millennials, who “have broadened their definition of sustainability into a larger sense of community. For the same reason they like the sharing economy and the maker movement, they like the idea of someone — a real person — carefully mending something they already own and love.”

But it comes at a challenging time for marketers that are trying to engage consumers with environmental messages. After years of making gains, green behavior is in decline. According to Shelton’s most recent survey, consumer enthusiasm for everything from home energy and water conservation habits, transportation activities, greener cleaning, personal care and food product purchases is either flat or falling. (Shelton’s isn't the only research tracking this trend: Results of the 2014 Greendex, a partnership between National Geographic and global research consultancy GlobeScan, reports that the U.S. continues to be the least sustainable of all 18 countries it tracks, and that it has been declining since 2012.)

Some of the fall-off, she tells Marketing Daily, is that the stronger economy has shifted consumer interest away from both frugality and the environment. “But we think that it’s also due to the strong trend among Millennials who have a growing ‘Do it for me, and do it for me now’ mentality. They have apps for just about everything but having someone wipe their backside, and they like that simplicity. The thinking seems to be that if Outback Steakhouse can tell me, via an app, exactly how long I have to wait in line and hold my place, I shouldn’t have to buy greener products. You’re the manufacturer — why can’t you figure this out? It’s not that they care less, or that they’re saying ‘the hell with the planet.’ But they think companies should be making their green decisions for them.”