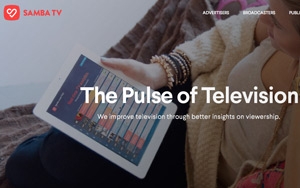 The Interpublic Group has taken a minority stake in Samba TV, the television analytics, data and attribution firm. Terms were not disclosed.

The agreement was orchestrated via the holding company’s IPG Media Lab, which has overseen the integration of Samba’s data and tools with IPG Mediabrands existing platforms.

As part of the agreement, IPG Mediabrands said that various teams at its agencies and other operating units, which include Initiative and UM, would use Samba capabilities to identify undervalued or overvalued media, as well as for audience insights.

The Samba data will also be used to build attribution models for direct-response television, and tune-in efforts, and to connect television and Internet impressions.

Samba TV's technology creates what the company calls “an enhanced viewing experience for linear, on-demand and over-the-top (OTT) television” by enabling recommendations and other interactive features.

Samba also enables data-driven advertising across all screens, from desktop to mobile to linear television, via its software platform that runs on smart televisions. The company provides aggregated and anonymized device usage and content viewership trends through its real-time analytics service. The company’s software and applications are currently available on over 36 million screens in 118 countries.

"Through the IPG Media Lab, Samba TV puts unique, real-time metrics about viewership into our hands, giving us insights into what strategies are working best for our clients, across multiple platforms, including TV," said IPG CEO Michael Roth.

Ashwin Navin, co-founder and CEO of Samba TV, said: “In IPG we have a great partner that shares our vision that media measurement needs to be holistic and media plans need to be planned and executed across platforms."

Last October, Samba added new features that allow consumers to seamlessly interact with shows they are watching on the big screen in their living rooms. The company said that through placement of cable boxes in its data centers across the country, it has added fingerprinting software that can monitor “every TV channel in real time,” and check that against social media and connected devices to determine top trending shows.

The improvements help advertisers, broadcasters and publishers use the data to know how and where advertising messages are being received, and on what devices.