Finally, An App That Rewards You For Sitting Around 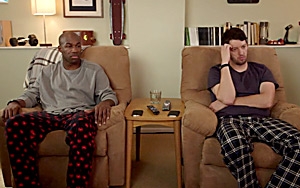 Jumping on the wearable technology trend, Kmart and Joe Boxer have released a new “Inactivity Tracker.” The electronic wristband works in a similar fashion to popular activity trackers such as FitBit and Nike Fuel. Rather than reward users for more movement, however, the band (and its smartphone app) reward users for sitting around.

“This is all about turning the fitness tracking trend on its head and playing off Joe Boxer’s irreverent [tone],” Jamie Stein, vice president of public relations and member communications for Sears, Kmart and Shop Your Way, tells Marketing Daily. Noting that Kmart has previously done Joe Boxer-tied holiday ads with along the lines of “Jingle Balls” and “Jingle Bellies,” Stein adds the company has a “long history playing off that with Joe Boxer.”

The tongue-in-cheek product rewards users with badges for increased levels of inactivity, such as: “Genghis Yawn,” “Couch Commander,” “Human Sloth,” and “Are You Dead?” “We’re encouraging people to embrace the couch and do nothing in your pajamas,” Stein says.

To promote the device, agency FCB Chicago created an hour-long YouTube video (yes, an hour), offering play-by-play of the “2015 Joe Boxer Lounger Games.” The video depicts two contestants (a veteran lounger and a rookie) simply sitting in easy chairs watching television. As the contestants make tiny movements (such as tilting a head or crossing one’s fingers), two commentators dissect every little bit to determine how that might affect the outcome. “Lots of leg movement over there,” says one. “Really interesting stuff,” responds the other. “For those of you unfamiliar with competitive lounging, stop living under that rock.” (Yes, that banter literally goes on for a full hour, yet never loses its entertainment value.)

“The FCB team had an idea that was definitely in line with [the brand’s tone],” Stein says. We wanted to make something sharable.”

Throughout the video (which has also been cut down into a minute-long version to be used in social channels and video pre-roll), the commentators encourage viewers to tweet their views using the hashtag, #chillhard. Additional promotional elements include public relations, in-store activations and an Inactivity Tracker content hub on Kmart’s Web site.

The tracker is only currently available as a limited gift with purchase device at Kmart’s Astor Place location in New York City, though the company has been surprising people using the hashtag with their own inactivity trackers, Stein says. Depending on how the stunt catches on, it’s possible the device will be expanded to other markets.

“The more it gets around and people see it, we’ll see where it goes,” Stein says. “We’re excited about the response so far.”