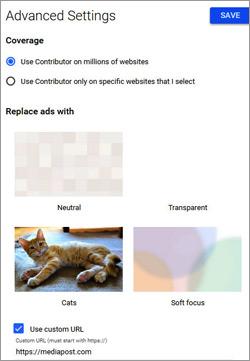 Contributor, first announced in November, is not an ad-free service. The subscriber chooses a monthly contribution and sets up a payment through Google Wallet. The service only works when Web browser in their Google account. The $2 fee reduces the number of ads on average a subscriber sees between 5% and 15%; $5, between 15% and 25%; and $10, between $25% and 50%.

A dashboard with a few settings keeps track of everything. There are two pages in the dashboard -- one that shows your contribution, the number of ads removed, and the sites with amounts contributed. The other allows the individual to specify the sites in which they want to contribute.

Advanced settings allow the user to replace ads with nothing, transparent, cats or soft focus, or a custom encrypted URL that begins with https://.  When replacing the ads with "nothing," under the ad unit earmark it reads "funded by you."

Depending on the amount the contributor chooses to pay monthly, Google determines how often the individual sees the thank you messages, so contributions go farther.

Mashable, the Onion, Imgur, ScienceDaily, wikiHow and Urban Dictionary have signed on to participate. In fact, Google tells us, millions of sites -- from small blogs to large news sites -- have joined.

Participating Web sites see a percentage of the money contributed by subscribers.