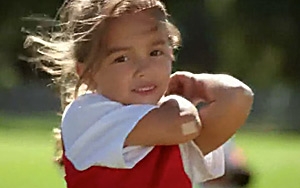 Band-Aid brand debuted in the number one spot for this year’s 10 best perceived brands by mothers, according to YouGov BrandIndex.

Last year’s number one brand, Dove, dropped out of the Top 10 along with Nike, Craftsman and Google. Amazon climbed three spots to take the number two position this year.

“Brand momentum, especially over a long period of time, is very difficult to maintain, especially in such a competitive environment,” says YouGov BrandIndex CEO Ted Marzilli.

Dove's "Real Beauty" campaign generated a lot of attention, but may have lost some momentum over the course of a year with women, he says.

Seemingly replacing Nike as the moms’ footwear of choice is Skechers, which also made the third-largest perception gains with mothers -- more than any other brand over the past year. In its first quarter ending at the end of April, the company recorded sales of $768 million, a jump of 40.5% over last year.

“Tastes change as well -- look at how Skechers has bounced back in the apparel and shoe category over the past year, even reflected in their quarterly earnings,” Marzilli says.

Other brands making their debut on the top 10 ranking include Clorox and Dawn.

Brands that have shown the greatest gains in perception by mothers over the past year were led by social media site Pinterest, followed by Skechers, appliance maker Maytag, the SyFy cable network, Bisquick, health snack brand KIND and Sabra Hummus.

“If there is any common theme among top brands, it's usefulness,” Marzilli says. “Most of the top 10 brands have some real application in the everyday lives of mothers. If a brand can integrate themselves like that to such a degree -- no easy feat -- they have a great shot at placing high on our rankings.”

YouGov BrandIndex filtered their entire 1,400+ brand universe for respondents who identified themselves as women over the age of 18 with children under 18 years old. The firm then ranked them using their flagship Index score, which measures brand health by averaging sub-scores on quality, satisfaction, impression, value, reputation and willingness to recommend.

“I always find the staying power of some very traditional brands quite interesting,” Marzilli says. “Band-Aids, J&J, M&M's, Clorox, Cheerios and Black & Decker are still right at the top of the best-perceived brands ranking, and they're positively ironclad veterans of many decades compared to relative newbies like Amazon and Skechers. I think the results suggest that brand loyalty still exists, at least for these long-lasting brands that are reliable, proven and embraced like second nature by moms.”