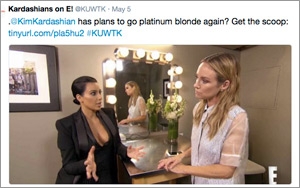 For years, Twitter and its rivals have been crowing about the power of social media to drive TV viewership.

Doubling down on these claims, new research from ShareThis shows a strong correlation between social engagement and higher tune-in rates. Users who click on shared content about a particular TV series are nearly two-and-a-half times more likely to become viewers, the social sharing service finds.

On average, 16% of viewers share about the shows they watch, but the percentages vary widely by genre. The social engagement rate among reality and variety show viewers is about 47%, while pure comedy shows only elicit an engagement rate of 9.5%.

Also of note, streaming shows like those found on Netflix see double the social engagement rate of broadcast shows (about 31% compared to about 15% on average).

The timing of social engagement appears to vary drastically by genre.

Most drama fans (34%) wait 24 hours until their shows end before yapping it up on Twitter, Facebook, and other social networks. Yet the vast majority of reality and variety show viewers (70%) do most of their social engaging during the show.

For example, the use of tablets, smartphones, and Twitter spike during the broadcast of a show. Yet viewers’ preference for their desktops and Facebook increases with every hour following and preceding a show’s broadcast time.