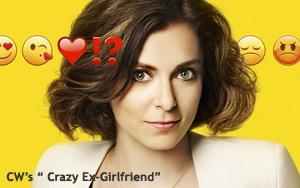 Coming off a good season -- in terms of gaining viewership -- the CW will be fairly stable with its programming at the start of new season -- just adding one new show.

“Crazy Ex-Girlfriend” will come to CW’s comedy Monday, pairing it at 8 p.m. with “Jane the Virgin,” which runs at 9 p.m. “Crazy” is about a crazy successful New York City lawyer who impulsively leaves her job and life to move to West Covina, Calif.

For this current season after 32 weeks, the CW has seen 15% higher overall prime-time viewers to 2.1 million viewers in the Nielsen live program plus seven days of time-shifting metric -- the network’s most-watched season in seven years.

In addition, the CW has maintained a 0.8 rating among 18-49 viewers versus the same time period of a year ago. This result is a strong performance, according to analysts -- versus many other cable networks and some broadcast networks, which have seen steep declines.

Mark Pedowitz, president of the CW, also says last season was “our highest-rated season among men” -- keeping its goal of expanding beyond its previous effort in targeting young women.

Two other moves by CW: “Reign,” which had been on Thursdays -- will move to Fridays at 8 p.m. In a press conference, CW’s Pedowitz, said “Reign” skews to an older audience and had trouble running against ABC’s “Scandal.”

In its place, “The Originals” will move, now airing at 9 p.m. on the night. It will be paired with the show from which it was spun off, “The Vampire Diaries.”

Coming in midseason will be two dramas: “DC’s Legends of Tomorrow,” about an unusual group of heroes and villains working together to prevent future problems. Also, “Containment,” which follows a mysterious and deadly epidemic in Atlanta.