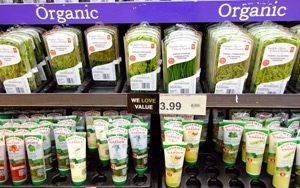 For all of their increasing health-consciousness and concern about the origins of food, a surprisingly large number of Americans don't understand what organic labeling really means, according to new research from Mintel.

In fact, 51% of U.S. consumers were found to agree that labeling something organic is "an excuse to charge more." This attitude is particularly prevalent (57%) among the "Swing Generation" — those born between 1933 and 1945 — and among Gen X (51%).

The distrust many Americans have of organic food and drinks extends beyond issues with the price.

More than a third (38%) of all consumers report that they view "organic" as a marketing term with no real value or definition, and only 29% recognize that organic foods and beverages are highly regulated, reports Mintel.

Even among Millennials, the demographic that most supports organics, fewer than half (40%) recognize that organic products are highly regulated.

“Consumers are confused when shopping for organics due to the large selection, confusion over natural versus organic claims, and limited regulation of the term ‘natural,’" said Billy Roberts, senior food and drink analyst at Mintel.

"Considering the typically higher cost of organic foods and beverages, consumers are increasingly hard-pressed to justify the added expense," he adds. “As such, [organics] sales have hit something of a plateau, where they likely will remain until consumers have a clear reason to turn to organics. This could come in the form of a growing number of lower-cost organic options, bringing a new degree of competition to the category.”

Actually, the competition already has intensified significantly. The number of chains stressing organic offerings has multiplied — there are newer options including Sprouts Farmers Market and The Fresh Market, as well as more established chains like Trader Joe's — and the mainstreaming of the trend has reached such a level that greatly expanded organic offerings has become a key strategy for giant traditional grocery players including Wal-Mart and Kroger.

As a result, Whole Foods, the long-dominant organic grocery player, has seen its momentum slow considerably — from average annual sales growth of 20.4% between 2000 and 2008, to 9.9% in the fiscal year ended last September, pointed out Bloomberg Business.

In response to competitive pressures and pricing pushback, including an inability to shake its "Whole Paycheck" image, Whole Foods recently made headlines by announcing that intends to create an entirely new, smaller and more value-focused retail format targeted to Millennials.

With organic options now widely available at less elevated prices, and with many consumers clearly confused or skeptical about organics' benefits, Mintel's Roberts says that organic brands and retailers may need to ward off consumer apathy about organics by making transparency and sustainable practices part of their business models. "Consumers likely focus on the short-term impact of purchasing a product, but brands could help shift consumer perception to be more about a longer-term and holistic approach to a healthy lifestyle,” he says.

Who's Buying Organics, and Why?

Sixty percent of Millennials report having purchased an organic food or beverage product in the past three months for themselves or others, but just 33% of consumers overall report the same.

In contrast, fully 58% of the Swing Generation, 51% of Baby Boomers and 43% of Gen X report that they don't eat any organic products.

Swing Generation and Baby Boomer consumers who do buy organics are much less likely to buy them in high volumes. Organics comprise just 6% and 2% of these two groups' respective food and beverage purchases.

Given those numbers, it's not surprising that 51% of Millennials indicate that they feel better about themselves when they purchase organic products, versus just 24% of Baby Boomers saying the same.