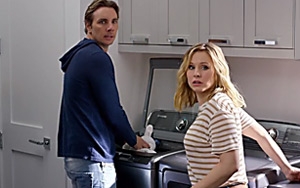 Celebrity couple Dax Shepard and Kristen Bell are using Samsung for more than just their mobile and entertainment needs in their latest go-’round for the brand.

The duo, who previously appeared in a holiday ad campaign for Samsung Mobile, are now appearing in a new national advertising campaign for Samsung’s home appliances, showing how the company’s wares help them keep some amount of control in their busy lives and with a growing family.

“For the 2015 home appliance campaign, Samsung is targeting the new generation of homeowners,” Katie Cheng, vice president at Samsung Electronics America, tells Marketing Daily. “Kristen and Dax embody this new generation of homeowners. They were first used last year in a mobile campaign, and we felt that it was a natural fit for the brand to bring their real, relatable personalities to Samsung’s home appliance business.”

The centerpiece of the campaign, from McKinney, is two television spots that show Bell and Shepard at home. In one commercial, they work to put together a dinner party, cleaning the floor with a remote-controlled vacuum, making space in the refrigerator for both wine and other beverages, and using a dual-compartment oven to create both gluten-free and vegan meals. By the end of the commercial, the party guests have canceled. A second commercial features a “code red” emergency, in which a beloved stuffed animal took a juice box to the face. Using Samsung’s washing machine, which comes with a built-in sink, Shepard quickly jumps into action to clean the toy before a full meltdown hits. Both spots conclude with Samsung’s tagline, “The next big thing is here.”

“Like Kristen and Dax, this new generation has their hands full balancing a growing family and busy careers,” Cheng says. “We want them to know that Samsung’s new appliances offer meaningful innovations that make life a bit easier.”

The campaign will also include print and digital executions, though the pair will not appear in print. There will be additional content that will appear on Samsung.com and across social media.