Crowne Plaza 'Always On' With Title Sponsorship Of PGA Invitational 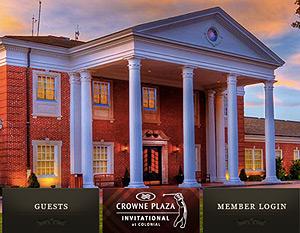 Crowne Plaza Hotels & Resorts is putting a strong focus on connectivity, productivity, and health and fitness at its properties this year. A big stage for that message is the 2015 Crowne Plaza Invitational this week at Colonial Country Club, in Ft. Worth, Texas, of which the IHG brand has been the sponsor for nine years. The effort includes advertising and digital elements, as well as a presence at the venue, and a new program, the “Always On Charity Challenge.”

The Challenge is a new social media contest that provides fans with the opportunity to support for their favorite golfer during the tournament while simultaneously benefitting charity. It lets them vote using Facebook and Twitter from May 18-24 for their favorite golfer, from a field of nine, using a unique hashtag found at AlwaysOnCharityChallenge.com. The participating golfers are Hunter Mahan, Boo Weekley, Scott Stallings, Kevin Streelman, Ryan Palmer, J.J. Henry, Eric Compton, Jimmy Walker, and Graham DeLaet.

Gina LaBarre, vice president, Americas brand management at Crowne Plaza Hotels & Resorts, The Americas, IHG, tells Marketing Daily that Crowne Plaza's relationship with the tournament has evolved over the years. “We first used the relationship to drive awareness of Crowne Plaza as a brand; over time we have been able to get more granular with brand messaging with regards to enhancements at the property level.” She says the hotel brand saw a big opportunity to get the word out at the tournament about its connectivity, productivity, and health and lifestyle innovations. “Golfers are the ultimate business travelers. They are on the road 30 weeks a year,” she says.

The sponsorship includes a media buy, about half of it during tournament week, “So we have a lot of frequency [this] week, and its pulled through integrated campaigns socially and digitally and through PR.” The company will also have signage on the course in Ft. Worth, as well as other branding installations, such as an area where people can meet the players. Crowne Plaza has connected with individual players through the PGA's Enhanced Player Program, and that includes for this year's charity component. “As part of our official hotel relationship we have access to PGA players to be partners for various grassroots initiatives,” says LaBarre.

The hospitality chain is touting improved connectivity in rooms, a one-time Internet sign-on so guests don't have to keep connecting to different wifi hotspots in different areas of the hotel, and wireless printing on demand. Crowne Plaza is also doing all new business centers, gyms, health and wellness programs, and other improvements.

Crowne Plaza says it will donate $90,000-$10,000 for each year of Crowne Plaza’s title sponsorship of the Invitational — to the local Fort Worth Birdies for Charity program in the name of the golfer with the most votes. The winning golfer will also receive an additional $10,000 from the Crowne Plaza brand to put toward a charity of choice. Nine fans who vote in the Challenge will also have a chance to be selected to receive 90,000 IHG Reward Club points each.

Crowne Plaza also has been a global sponsor of BMW Motorsport since 2010.