Marketers Investing In More Audience Data; Expenditure Up 37% In U.S.

In the programmatic ad-buying world, audience data has become increasingly important. And that's because one of the promises of programmatic is the ability to decouple your audience from specific content. Yes, content still matters. But programmatic tech, in theory, allows your to follow your audience everywhere -- not just where it’s obvious.

In order to do that effectively, however, marketers need a trove of audience data. That's part of the reason that data has been called the new currency by some.

So who is investing in it? In short, everyone. But Eyeota, a data management firm, broke down audience data expenditure by region and sector to give the industry more insight into who exactly is going all-in on audience data.

The automotive, financial, electronics, services and utilities, and “fast-moving” consumer goods industries were the biggest spenders when it came to acquiring new intent and audience data during Q4 2014.

The automotive sector, led by luxury brands, increased worldwide audience data spend by 77% from Q3 2014 to Q4 2014, per Eyeota. Financial advertisers increased their spend by 35% quarter-over-quarter.

Sports marketers increased their investment in audience data more than any other sector in Q4 2014 -- compared to what they spent in Q3 2014 -- followed by the multimedia and home & garden sectors.

Eyeota is a third-party data supplier, and the data here reflects the activity taking place in their “Data Marketplace.” 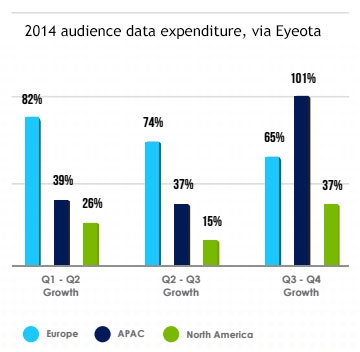 When looking at different regions from around the globe, Eyeota concluded that the maturity of the market (i.e., country) in terms of its programmatic adoption dictates how much more marketers in those respective markets are investing in audience data.

“For example, the United States is one of the most mature markets for programmatic,” writes Eyeota, “which explained reduced but steady growth during Q4 2014.” Marketers in the U.S. spent 37% more on audience data in Q4 2014 compared to Q3 2014.

In the APAC region, however, which is still catching up on all things automation, audience data expenditure increased 101% quarter-over-quarter. In Australia, one of the more developed markets in the APAC region in terms of programmatic adoption, growth was a little more steady, checking in at 49%.

“This steady growth was expected for the UK and Australia as they are both advanced programmatic markets in their respective regions,” writes Eyeota.

Eyeota plans to issue an audience data index on a quarterly basis, with a Q1 2015 update expected soon.