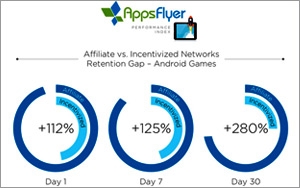 Google's search advertising platform AdWords does not drive mobile app installs as effectively as users may expect. A recent study that evaluates performance networks and media ranks Google's advertising platform at No. 4 when it comes to volume and retention quality, behind some unlikely players.

Based on the quality and quantity of installs an app can generate, Facebook came in at No. 1 on both iOS and Android. Chartboost took the No. 2 spot for both, and programmatic ad network AppLovin rounds out the top three for iOS. Mobvista took No. 3 for Android Games.

In fact video outperforms search, ranking about 28% higher; social, 21% higher; and in-app ads 9% higher. Search did beat affiliate ads and those with incentives, 272%, and 438%, respectively, when it comes to download and retention rates.

AdWords ranks No. 4 on the list for both iOS and Android. Rankings are based on retention quality and volume capabilities. The effectiveness of search marketing for mobile app installs on Android, search is the No. 2 ad format for driving high-retention users, outperforming social ads by 9%, in-app ads by 38%, affiliate ads by 48%, and incentivized ads by 202%. Video leads by 18%.

The report from AppsFlyer, a mobile analytics and attribution company, focuses its first Ad Network Performance Index on the gaming vertical. The report provides a detailed review of network performance, and includes a scorecard on gaming apps retention rates, the quality of acquired users, as well as a power ranking that factors both retention and scale to rate the quantity of installs. It analyzes 25 ad networks on days 1, 7, and 30 for devices running Android and iOS.