45% Of Display Ads Bought Via Programmatic In UK 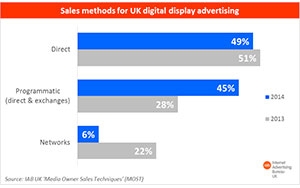 Nearly half (45%) of online display ads purchased in the UK in 2014 were bought through programmatic ad technologies, according to a new report from the Interactive Advertising Bureau’s (IAB) UK division. That's up from 28% in 2013.

Per the report, UK advertisers spent just shy of £1 billion on programmatic display ads last year -- about $1.5 billion. The data was collected by research and strategy consultancy MTM.

With programmatic ad-buying taking hold in the UK -- both via exchanges and through “programmatic direct” platforms -- networks have taken a hit.

Programmatic has also taken over mobile ad-buying in the UK. According to the report, mobile programmatic buying nearly doubled from 2013 to 2014, jumping from 37% of all buys to 64%.

“Programmatic’s role in digital ad buying has grown from virtually zero to nearly half of all transactions in just five years,” stated Tim Elkington, chief strategy officer at IAB UK. “However, the impact on mobile has been even greater due to its more fragmented ecosystem providing a ripe breeding ground for intermediaries.”

Video is growing as well, with 18% of video ads in the UK now being purchased through programmatic.

“Consequently, due to the rise in mobile and video ad spend, we estimate around 70-80% of all digital spend will be programmatic by 2018,” stated Elkington.