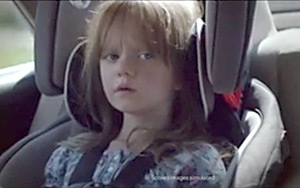 AT&T is taking its “It can wait” anti-distracted-driving campaign to the airwaves this summer with a jarring Internet film and television commercials depicting the disastrous results that can occur when checking one’s phone while behind the wheel.

The television campaign, from agency BBDO, uses slow-motion cinematography to depict the aftermath of what happens when a driver takes his or her eyes off the road. Occurring backwards and in slow-motion, the spot begins as an accident is happening, cutting to bystanders staring, shocked reactions within the car, airbags inflating, and a woman putting her phone in a car’s cupholder. The spot moves into real-time just before the accident occurs, as the woman’s phone gives her an alert, resulting in her saying: “Everyone loves the picture I posted of you.” The spot then ends with the accident happening in shocking real-time speed and onscreen text reading: “No post/glance/email/search/text is worth a life.”

“We hope these ads will challenge viewers to put themselves in these scenarios,” Michelle Kuckelman, executive director of brand management at AT&T, tells Marketing Daily. “Many of us do it and think we are invincible, but the spots show that it can happen to anyone. All it takes is one glance at your phone while driving that can change a life forever.”

The commercial, which will appear on national networks and on itcanwait.com, is culled from a longer 4-minute film that depicts six people on an otherwise average day whose lives are changed by the accident. The longer film shows the characters going about their daily lives — running errands, making dinner plans, doing daily chores — when the brutal accident (one car flips over three times) occurs. The accident then runs in reverse in slow motion before the anti-distracted-driving message appears.

The spots are in support of AT&T’s five-year-old “It can wait” campaign. Although the campaign began five years ago as an anti-texting and driving effort, it was expanded earlier this year to include a whole host of other activities, recognizing the reality that people do more than simply use their phones for texting these days.

“Recently, we released research that shows the problem is bigger than texting and we wanted to get that message out to as many people as possible,” Kuckelman says. “Since we started our campaign, we have always focused our efforts during the summer months because it’s the time of year when more people are on the roads.”

In addition to the television ads, AT&T is also releasing a virtual reality app, in which people can use their smartphones and a Google Cardboard virtual reality viewer (a piece of cardboard that turns a smartphone into a VR headset) to simulate the dangerous realities of distracted driving. AT&T will be taking a more sophisticated version of its VR app (using a Samsung Gear VR headset) on a 100-city tour through the remainder of the year.