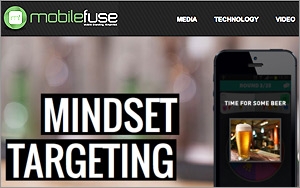 Ken Harlan, cofounder of ad network MobileFuse, started thinking about receptive moments on mobile devices a year ago. With desktops, consumers focused on their devices. It’s trickier with mobile, he says. “If you don’t know the right time to deliver an ad—because it’s so personal—you can actually ruin a relationship with a customer by serving the wrong ad.”

Building on this idea, MobileFuse developed Mindset Targeting, which delivered rich media and mobile display ads to consumers based on contextual data beyond physical location. Now, it can deliver video ads, too.

Adding video ads to their arsenal builds on that basis of engaging moments. “Mindset becomes very powerful when you combine it with an emotional medium [like video],” says cofounder Val Katayev.

A customer’s physical location can be misleading—someone in a football stadium may be there to watch a soccer match, or a concert. Mindset Targeting takes location, environment and receptive time frame (the soccer match may only be from 7-10) into account

For example, a luxury SUV company MobileFuse worked with found that its customers were more engaged in colder weather. It makes sense once you hear it—driving on icy roads may incline one to think about four-wheel drive, but it’s not necessarily an obvious connection to make.

In another example, a national retail chain for tweens to 20somethings wanted to work on geofencing campuses. School seemed the most obvious place to target them. MobileFuse recommended they try off-campus as well, in a number of other different locations. It found the off-campus points had a much higher level of engagement from the target audience than when they were on campus. “They weren’t in the moment to interact while they were at school,” says Ken.

A lot of space is expected to open up in the mobile video industry. Analysts predict ad spending will reach $6 billion by 2018. According to Neilsen, mobile video ads are nearly four times more effective in driving purchase intent, as compared to traditional TV ads.