In what likely is the first comprehensive analysis of actual data from big agency media buys of its kind, Madison Avenue’s major agency holding companies have boosted their spending in digital media by $3 billion during a nine-month period ending with June 2015, and most of it came at the expense of traditional media. The data, which was released Wednesday by Standard Media Index, looked at the those months, because they happen to coincide with the so-called “broadcast year,” which is the way TV networks and stations typically account for their advertising revenues. Not surprisingly, the biggest hit in Madison Avenue’s digital media shift is coming from their TV advertising budgets.

“The results show that digital is siphoning share away from other media, with the bulk of it coming from television,” explained SMI’s Bree Sutton, noting that national TV ad spending trends have been reflecting that.

“On the national TV front, the scatter market has clawed back about 35% of the ad revenue lost in the soft 14-15 upfront, however the remainder of those dollars have flowed into digital,” she pointed out.

What makes the analysis so significant is that it’s not based on third-party estimates, but is derived from actual media buys processed by big ad agencies representing about 80% of holding company billings. The analysis estimates only about $1 billion of the $3 billion in digital spending was “organic,” meaning it came from new budgets earmarked for digital media. The rest presumably came at the expense of other media.

While there are some macro factors driving those declines -- including comparisons with year-ago spending that included the World Cup Soccer tournament -- there clearly is a more secular shift going on too.

The SMI analysis estimates about $350 million of digital’s growth came at the expense of “print” media, and about $150 million came out of radio. 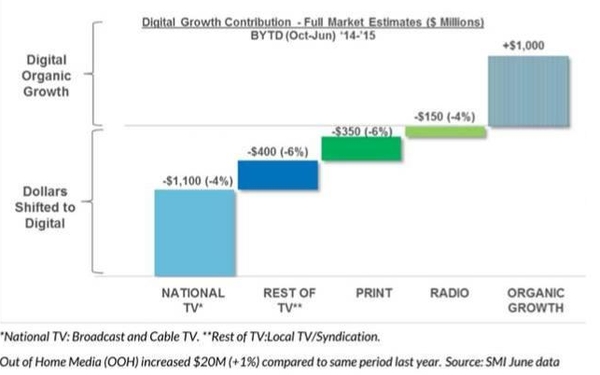