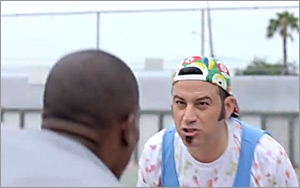 It takes a special kind of A-game to break through the cluttered (and typically stellar) world of athletic shoe ads. That means more than one NBA star. And in this cautionary tale, it may require a mouthy has-been like Bobby Butter, played by Jimmy Kimmel.

The company says it hopes that adding Kimmel will help it push the comedic edge it has tried to hone throughout the #Approved campaign. The ad promotes both the Adidas Originals ZX Flux Prism Sole and Red Galaxy models. The line is priced between $90 and $120.

But it’s not the only retail partnership Adidas is selling for back-to-school. The German company has also unveiled its new Adigirl Collection, designed specifically for teen athletes, in partnership with Dick’s Sporting Goods.

While every athletic brand, led by Nike and Under Armour, is pushing women’s collections as hard as they can, Adigirl is aiming at a smaller niche, with both high-performance and teen fashion sensibilities.

Inspired by five sports–basketball, volleyball, track, softball and soccer—the collection crosses over into lifestyle, as well. The bright colors include reds, deep purples, blues, and plenty of floral prints, with functional slits and mesh, as well as punk cutouts.

The digital and social campaign plays on copy that turns fashion phrases into fitness. “My runway,” for example, shows a group of girls racing up stadium bleachers. "The Adigirl is an athlete at her core but we have to acknowledge the powerful, multi-faceted teen that she is,” says an Adidas exec in the release. “This collection intends to address the needs of her demanding lifestyle, uniting sport with style.”