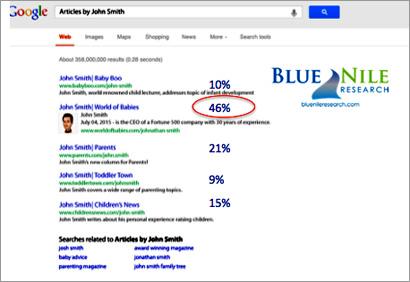 Images in search engine query results will teach marketers to change their thinking that only position No. 1. in search results returns higher clicks and conversions. Here's why.

The top position in search engine query results seems like the coveted spot, but a study released from Blue Nile Research suggests otherwise. Visual cues attract the human eye, making it much more likely for consumers to click on a link at position No. 3 with an image, compared with position No. 1 without.

The study challenges the rule that position No. 1 generates the highest return on investment. It shows those participating in the study and asking them where they would click first.

Blue Nile identified three rich-media scenarios among the most common that occur in search results: reviews, author images and local results for nearby businesses.

The findings in all three scenarios suggest that when the results, even in position No. 2, include an image, it captures an average of 61% of clicks, compared with 48% when the same un-enhanced result appears in position No. 1 -- a 13pt lift.

Nathan Safran, Blue Nile CEO and co-founder, takes us through the results of each scenario in the study.